Since 2022 at the latest, it has been clear that the European path to climate-neutral, energy-autonomous heating technology should lead primarily via the heat pump. The fact that it is also ideally suited for cooling, for example when distributed via surface heating, is another plus.

Heat pumps usually work with an integrated controller which ensures the safe and efficient operation of the heat pump. The core function is the control of the compressor and some protective functions, which, for example, protect against frost damage, or prevent overpressure.

More sophisticated heat pump controllers go a few steps further in their range of functions. They control, for example, the storage charging pump or a system pump, which are also subject to runtime optimisation, just like the compressor. In the case of ground-source heat pumps, this function also applies to the brine pump.

Heat pump controllers can also include a simple domestic hot water function, take over the management of an electric heating element for peak loads, or manage a heating circuit function for simpler standard systems. In the best case, this is weather-compensated.

A weather-compensated heating circuit control is based on a characteristic curve based on the outdoor temperature. For this purpose, the slope of the curve, the parallel shifts for day, night and comfort mode, and in some cases a split point for a kinked curve can be set. Weather-compensated control thus flexibly adapts the flow temperature to the weather and therefore works in a more energy-saving and temperature-stable manner.

In accordance with the wide range of possibilities, the actual functional scope of available controls also varies considerably. Last but not least, this also depends on the application or system structure for which the heat pump manufacturer designs his control system.

If, for example, he assumes a monovalent system, the integration of other energy sources will only be controlled in a rudimentary way or will be left out completely. If, in another example, the heat pump is part of a compact unit with an integrated hot water tank, the more likely it is to have a really well thought-out domestic hot water function or the preconfigured integration of an electrical heating rod. And so on.

The state of the art also varies from country to country. In Germany, weather-compensated heating controllers are now standard. Meanwhile, in Mediterranean regions, heat pumps more often comprise active cooling with switching between heating and cooling. In the south, the air-water heat pump dominates, while the controllers for Nordic countries are designed more for ground source heat pumps. The bottom line is that, for price reasons, heat pumps often tend to start with a simple controller that fulfils the basic functionality for standard cases.

But what if it is not such a standard case? After all, heating technology is characterised by retrofitting. Therefore, the most diverse combinations, system concepts and sometimes even craziness can be found in the field. No wonder, because most heating systems have been pieced together like a patchwork quilt over decades. This calls for flexibility, which can also be easily upgraded via external add-on modules.

The bivalence point in systems with multiple heat sources

In addition to combining the functions described above, modern system controllers can take on various other functions. In hybrid systems with several heat sources, such as gas and heat pump, the bivalence temperature plays an important role. By means of an adjustable bivalence point, the optimal timing of switching the second source on or off is ensured. Or, if possible, its modulation. 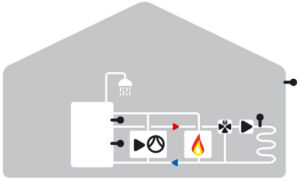 First, a minimum outdoor temperature can be set for the heat pump below which it is to be deactivated. Heating is then the sole responsibility of the secondary source. This makes sense because the efficiency of the heat pump decreases in cold weather.

However, if the necessary heating output is not achieved by the heat pump alone over a longer period of time, the second source could also be switched on. The heat pump then runs alone before the second source is added after a time delay. This principle ensures a higher operational reliability, for example, if high setpoint temperatures are required or a high heat consumption occurs. On the other hand, it could be disadvantageous that customers complain about the simultaneous operation of the heat pump and secondary source such as gas burner or electric heating rod due to a lack of understanding of the system. 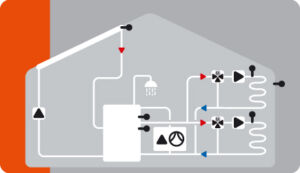 Domestic hot water heating is traditionally rather a weak point of heat pump systems, as the higher temperatures reduce the efficiency of the heat pump. The DHW functions in heat pump controllers are therefore often kept quite simple and could also be expanded to include useful functions. This includes the charging management of the hot water storage tank, where different setpoints should be controllable in different time ranges. The support of multi-storage systems by controlling also the storage tank transfer creates additional flexibility.

Another example is a legionella control for the benefit of DHW hygiene. If the system technology is controlled from one central device, it can switch on the heat pump or other energy sources to carry out thermal disinfection. Through integrated logging functions or the connection to cloud servers, these can also be recorded and thus proven, where required for commercial systems.

How does the heating controller operate the heat pump?

Where an external system controller is used, the interface to the integrated heat pump controller must be clarified. In the simplest case, this consists of a dry relay contact that is used to switch an energy demand to the heat pump. The modulation remains within the scope of the heat pump. This increases efficiency and protects components such as the compressor.

A second possibility is a 0-10V signal, which can also be used to request the temperature from the external heating circuit controller. This calculates the required setpoint temperature of the heating circuit flow or domestic hot water and transmits the corresponding signal to the heat pump. Depending on the manufacturer, 5V could correspond to a setpoint temperature of 50°C, 6V to 60°C, etc. This external modulation also pursues the goal of optimising the running time, so that the heat pump is prevented from starting too frequently.

The third way is via a digital interface such as the Modbus. Although this is the most complex option, it offers many advantages, not least due to the bidirectional communication. These certainly include the possibility of system monitoring and even remote configuration of essential parameters of the heat pump, such as the setpoint temperatures and the output. The article ‘How Connectivity Shapes the Future of HVAC‘ explores what other advantages connectivity offers. The special features that arise for product development are explained in the article ‘8 Challenges for Developing Connected HVAC Systems‘.

The connection with photovoltaics and the power grid

In addition to the heat pump, photovoltaics also play a central role in the energy mix of the future. Since both technologies complement each other ideally when powering the heat pump with self-generated PV electricity, they have what it takes to become tomorrow’s classic duo.

As the smart grid gradually becomes a reality, this results in new requirements and potential for heat pump control. A sensor input can be monitored here for a short circuit of a PV contact. This could put the heat pump into a comfort mode that aims for a higher setpoint temperature to use the electricity.

A second clamp can be used to provide a possibility for the energy supplier to exert an influence. Both inputs are monitored for open terminal (0) or short circuit (1), which makes four operating modes possible:

The use of electricity surpluses is particularly interesting in systems with buffer storage, as this can simply absorb the additional energy and use it later. A buffer storage unit can thus fulfil a similar operating principle as an electric battery storage unit and has real energy, economic and ecological advantages. The disadvantage is that the COP of the heat pump tends to be lower at higher storage temperatures, but this is of secondary importance in the context of electricity surpluses.

The use of electrical energy to generate heat is also called power-to-heat or P2H. Due to the increasing use of variable electricity generators such as wind power and photovoltaics, there are more phases in which electricity production exceeds demand. Instead of simply shutting them off, the conversion of electricity into heat is an option. This can be done using efficient technologies such as the heat pump or directly with electrical heating rods. Power-to-heat is thus one facet of the so-called sector coupling of the energy industry. To increase flexibility, thermal storage units are often used in power-to-heat systems.

The heat pump with underfloor heating and cooling

Multi-zone control of underfloor heating systems can also include a heat pump that optimises the operating times of the heat pump. This includes minimum running times, pause times, time delays such as between the compressor and the storage charging pump, or also overrun times for efficient and gentle heat pump operation. For example, the valves in the heating manifold can be controlled so that they only open after an appropriate waiting time and then remain open long enough to allow the heat pump to achieve its minimum running time. 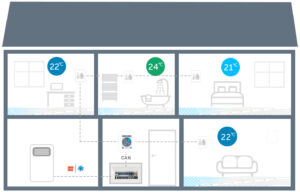 With integrated heat pump controllers, the combination of heating and cooling is often only rudimentarily controlled. Reliable dew point management is often neglected here, for example by only providing a system shutdown via a pipe-mounted sensor on the flow.

In contrast to overall system shutdown, it would be desirable to control the flow temperature in cooling mode as well, taking into account a dew point calculation, whereby the shutdown can often be prevented. Another approach would be a zone-by-zone differentiated dew point management, so that the heat pump can continue to operate for all rooms where it remains safe. Given the increasing popularity of such multifunctional systems, we will certainly see an increasing depth of functions for the combination of heating and cooling. 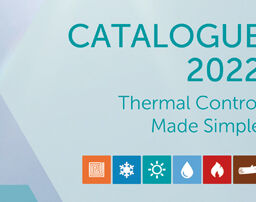 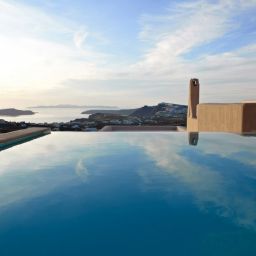 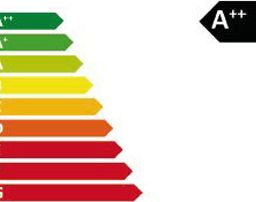 Improve the ErP class of a compound system with heating controllers