The User Experience (UX) of connected heating and cooling systems

The User Experience (UX) of connected heating and cooling systems

Shortly after its foundation in 1997, Google adopted ten principles, which are still valid guidelines on its website today[1]. The very first:

„Focus on the user and all else will follow“

Creating a positive user experience – or UX – has been gaining in importance in heating technology for years, just as manufacturers have been competing for scarce assembly capacity to buy and install their products. Above all, competent installation capacity is scarce.

In addition to classic technical criteria such as system efficiency, system pressure or temperature stability, UX will also play a role in deciding which manufacturers can attract capable installers to their brand.

The user experience is often confused with the “user interface” or the visual product design, but includes the entire customer journey that is taken to solve a problem – the sum of all interactions of the user with the product.

The chapter Usability of connected systems covers by which aspects the user interface of connected HVAC products must be extended and how it can still be kept short and clear.

Infobox: Components of the User Experience

… BEFORE using the product:

Forming expectations, identifying the right product for the customer’s problem, discovering and understanding the functional scope.

interactions with the product itself.

… AFTER using the product:

the “lasting impression”, the longevity of the product or the technical support.

After all, it is not the food alone that decides whether a guest will come back to a restaurant, but also the service, music and lighting, clarity and content of the menu, parking situation and more.

In heating technology, a positive user experience thus encompasses not only the technical parameters of a product, but also easy product selection, the installation process, the clarity of the technical documentation, joy of use and peace of mind when leaving a functioning system on site.

UX tips for the setup process

Before a user can enjoy a functioning product, the commissioning process must be successfully completed. Connected products are rarely so trivial that a user can put them into operation without instructions. Even simple components such as a wireless sensor require knowledge of certain keystroke combinations or interpretation of the flashing codes of an LED.

Guided commissioning with clear step-by-step instructions is therefore recommended. These can conventionally be enclosed with the product manual. This practice is well-established and easy for the manufacturer to implement.

With connected products, however, digitally guided commissioning is increasingly being used, which takes the user by the hand in the display of the device or via app.

A digitally guided setup offers a significant advantage over an operating manual: the user receives real-time feedback. He always gets an orientation at which point of the process he is and, by automatically advancing to the next step, he learns whether the previous one was successfully completed or, for example, an invalid entry was made.

There are two approaches to digital commissioning: the device-led and the service-led approach.

Device-led commissioning should be used primarily when connecting the system is an option that is not essential for the functioning of the system, or when the connection is usually made at a later time. This can be the case, for example, in new buildings where the installer carries out the commissioning but the resident does not have a WLAN router until after moving in to set up his system for remote access via smartphone.

Moreover, if a physical product is the main focus of the purchase, many users find the sequence of commissioning the hardware first more intuitive than the other way round.

A service-led setup makes sense for products that have little computing power or do not have a sufficiently high-resolution display, such as devices with seven-segment displays or without a dedicated interface. Commissioning via a smartphone app can thus compensate for less well-equipped hardware, but requires some further consideration (see also “The role of the smartphone as a control unit for HVAC systems“).

In addition, a service-led commissioning is also a good idea, for example, if the user of the product is clearly defined and has made a conscious purchasing decision for a strongly Internet-driven product. This could be the case, for example, when selling a Wifi TRV (thermostatic radiator valve) as a do-it-yourself product.

The “correct” sequence for commissioning

Since connected products often consist of several parts, it should be remembered that the user may choose a different sequence for commissioning than the so-called “happy path” for which the product concept was designed and tested. In fact, the happy path is often the exception rather than the rule.

Especially in the heating industry, which is characterised by retrofitting, an installer may be exposed to very different installation situations, which may make deviating procedures plausible or even necessary. The setup process should therefore be carefully designed so that the user can reach his goal in different ways.

The process should also allow the user to complete it only partially, pause it, and continue later at the same point. For this purpose, timeouts for the steps of a setup process should be designed rather generously and previously made settings should be stored temporarily if possible.

After all, if users need to complete the whole process in one session, it requires having all the necessary information at hand, such as WiFi passwords or device IDs, and finding a time when they don’t have to worry about interruptions like incoming phone calls.

A different approach is to focus on a particularly clear specification of the steps to be taken to get the system up and running, and to make sure they are followed strictly. These specifications must be formulated unambiguously and must also be placed in an unmistakable position. Even the best instructions in an operating manual will not be effective if the user does not consult them at the right moment.

In practice, this is often a problem and won’t stop an installer from passing it back to the manufacturer as a support case or expressing (even if unjustified) criticism of the product. Shifting the instructions to the display of the device could be a remedy, provided that technical equipment such as resolution and computing power are sufficient.

A combination of both approaches might be most effective. The Poka Yoke principle – Japanese for fail-proofing – from the Toyota production system offers some interesting suggestions. Nevertheless, since manufacturers have to economise with limited resources in product development, they must still assume a certain minimum level of workmanship to be provided by professional installers.

Anyone who has been in the HVAC industry for a longer time will certainly have seen many a curiosity from the field. The series Pfusch am Bau regularly provides some particularly good arguments for not underestimating fail-proofing (in German, but most pictures speak for themselves…).

Ease of use for device pairing

The initial connection of several devices or system components is called pairing. For example, linking a heat source with its associated room control panel, assigning sensors to a master, or connecting several heating manifolds over several floors. The challenge is to design the pairing process as simple as possible, but as safe as necessary.

Direct wiring usually corresponds to the “Just Works” method, is simple and, in most cases, safe enough for heating technology. For wireless connections, pairing by an intentional action is recommended, for example pressing a button on both devices.

A two-factor authentication with a combination of knowledge and possession offers even more security if required, but also increases the demands on manufacturers and/or users. The combination of chip card and PIN is a well-known method from the banking sector.

Since connected products are always part of a system, product concepts must look beyond their own horizons. The three factors that must be fulfilled for a good system concept are described in the chapter “Design for systems, not products“. 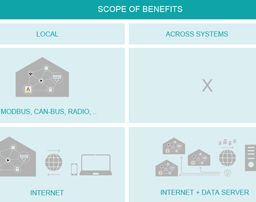 How connectivity shapes the future of HVAC 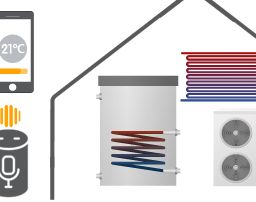 Alexa, smartphone and co: Opportunities and Limitations for the Heating Industry